Buon giorno and welcome to Stefano’s RomeCabs, Rome’s leading company for private Shore Excursions from Civitavecchia, as well as Port Transfers and Day Tours through Italy.

Below are the tours, along with descriptions, photos and videos to help you choose the tour best suited for you and your family.

ALL the tours below are also offered as a Day Tour from Rome hotel for cruisers who are staying in Rome pre cruise or post cruise, as a Shore Excursion for cruisers docking in Civitavecchia just for the day, and a Post Cruise Tour option with pick up from Civitavecchia and drop off hotels in Rome or Fiumicino.

ROME IN A DAY

Rome in A Day is by far THE most popular shore excursion from Civitavecchia as well as day tour from Rome for cruisers spending time in Rome pre cruise or post cruise.

Cruisers who book this tour wish to visit and experience the “must sees” and we make it possible on our Rome in a Day tour!

The suggested itinerary for the ROME IN A DAY tour is:

Visit inside the Colosseum, world’s most famous ancient Roman amphitheater

View of the Roman Forum from top of Capitoline Hill

See Circus Maximus with the imposing backdrop of Palatine Hill

The Vatican – prepare to be amazed by the treasure trove of art inside the vast Vatican Museums, Michelangelo’s masterpieces inside the Sistine Chapel, and the wonders of St Peter’s Basilica.

ROME IN A DAY TOUR from Civitavecchia with Stefano’s RomeCabs

Panoramic Rome for Cruisers offers a panorama of the Eternal City with a taste of Rome’s highlights and a few surprises.

This tour is also an excellent option on the 1st Sunday of the Month when it’s not possible to visit the Vatican Museums as they are closed and the Colosseum has free entrance which results in hours’ long wait in long lines.

Enjoy a taste of La Dolce Vita with visits to Rome’s most popular and lively squares: Trevi Fountain, Spanish Steps, and Piazza Navona.

From Colosseum Square, you can take in the massive awe inspiring Colosseum before you.  If you walk a bit further, you can also see close up the giant Arch of Constantine (one of the 3  triumphal arches closely located – the other 2 are inside the Roman Forum and you can see them from top of Capitoline Hill)

A visit to the 12th century Basilica of San Clemente will surprise you with an underground journey back in time to Ancient Rome as you peel off the layers of Rome’s 2,000 year old history.  On this amazing underground journey you will explore an early 4th century church upon which the current one was built, and further below the remains of a 3rd century ancient Roman apartment complex with a Mythraic temple dedicated to Mithras – an ancient Roman pre-Christianity cult.

A visit to the Colosseum to explore the colossal ancient Roman amphitheater.

A drive through Piazza Venezia will take you to Capitoline Hill for a picture perfect view of the Roman Forum.

You will continue your drive past Teatro Marcello to the church of Santa Maria in Cosmedin to see the Mouth of Truth (Bocca della Verita). If you don’t mind the line, you can have your own pictures taken infamously putting your hand inside the mouth of truth and hope it won’t bite you should you telling a lie!

A stop for a stroll along the beautiful Ponte Sant’Angelo bridge that’s next to Castel Sant’Angelo – the mausoleum of ancient Roman emperor Hadrian that was later converted into a medieval fortress, a prison and then a castle with ornate quarters.

Trevi Fountain has been featured in so many classic movies that it most definitely merits a visit, along with the elegant Spanish Steps.

No movie buff would miss the opportunity to stroll along Via Margutta – the street made famous as the actual address of Gregory Peck’s character: Via Margutta 51. It’s a quiet, pristine, charming oasis in the middle of a chaotic city.

Last and not least, a visit to the fabulous Pantheon will complete your Vacanze Romane / Roman Holiday tour.

Vacanze Romane Tour was recommended by Travel and Leisure Magazine

Ancient Rome history buffs  frequently choose our Seven Wonders of Ancient Rome Tour for the wonderful experience of exploring ancient Rome’s most fascinating engineering feats we can see in their monuments, roads, buildings, aqueducts, and ruins.

Your Rome tour through the Seven Wonders of Ancient Rome will first take you to the Colosseum – one of the world’s greatest examples of Roman architectural and engineering achievements.

Nearby, you will see what remains of Circus Maximus, the largest chariot racing and sports arena of Ancient Rome.

The Imperial Baths of Caracalla will leave you in awe as you walk through the giant structures that are all that remains from Emperor Caracalla’s massive complex that included Olympic size swimming pool, cold and hot baths, gymnasiums, Greek and Latin libraries, conference rooms, and more.

You will next drive to the 4th century Ancient Appian Way – known as “Regina Longarum Viarum,” or “Queen of the Long Roads”, and one of the most important strategic roads of the Roman Republic. Segments of this ancient road are impressively well preserved so you can have an overall idea of what an ancient Roman road was like.

The Park of the Aqueducts is not a regular park, but jaw dropping display of remnants of some of the seven major aqueducts of Rome that were Rome’s lifeblood, carrying water uphill and downhill for long distances.

The Pantheon is always a favorite… regardless of the theme or subject of a tour.  And it’s also one of the Seven Wonders of Ancient Rome, followed by Trajan’s Forum which will complete your tour.

Just across the Roman Forum, Trajan’s Forum is a testament of Ancient Rome’s golden age of architectural wonders commissioned by ambitious Emperors, and overwhelmed visitors for ages. What is most visible still is Trajan’s Column (a victory column that details Trajan’s successful campaign against the Dacians – modern day Romania), and Trajan’s Market – possibly the world’s first shopping mall!
. 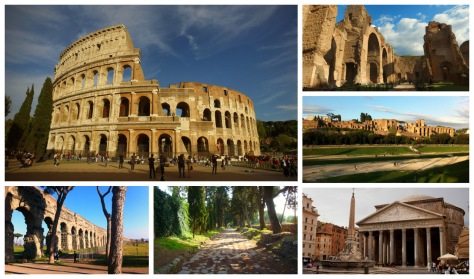 Many years ago fans of the book and movie Angels and Demons, inspired our sister company Stefano Rome Tours to create this tour and offer Cruisers the opportunity to come face to face with many of the amazing locations in Rome featured in the the novel and movie.  Long after the movie and book lost popularity, cruisers and travelers alike still book this tour to enjoy the locations in Rome that are wonderful to visit whether or not you are a fan of the book and movie.

The Angels and Demons tour take you to the primary locations that represent the 4 elements featured in the book: Earth, Fire, Water and Air, as well as other must see locations in Rome related to the novel and movie:
.

Thank you for visiting our travel blog and reading our 5 TOP “Cruisers’ Choice” Shore Excursions from Civitavecchia – with RomeCabs article.

To browse through our day tours, shore excursions from other cruise ports in Italy, and transfers,  please visit our website.

We look forward to showing you beautiful places in Italy!